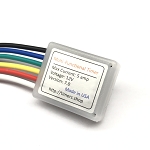 We have been working on introducing a new version of the multi-functional timer. The new version (release on 02/2019) have a number of new functions. We introduced power independent function where the timer can be used to track the usage of various equipment. Once you set the duration the timer starts the countdown and once countdown gets to 0 the output turns On to indicate the equipment service is required. The uniqueness of this feature lays in timer's ability to save the intermittent countdown into the internal memory. The countdown is not reset when power is removed. It stops for a period of the power outage and continues after power is restored. It could be used to indicate equipment maintenance periods, filter replacements and etc.
Another interesting function added is Counter. In the counter function, the timer can be set to count the trigger impulse and supply output after a set number of impulses arrive.
The Random Cycle function has also been added, allowing for the timer to turn the output on and off in random times.
We have extended the timer's voltage range and the timer can now accept a wide range of supply voltages. 3V to 18V for 5amp version and 6V to 28V for 10amp version.
5 amp timer also received a Low Power mode which is enabled by default. In low power mode timer drops the idle current consumption to 0.3ma which makes it applicable to a variety of battery powered application.
Overall current consumption was also dropped to 2ma.
Previous Post
Next Post
Quick View